A Decade in Review

[fusion_text]As the clock strikes midnight on December 31st, 2019, we officially close out a decade and move into a world unknown. 10 years goes by faster than you think, and moments of significance seem to come and go in the blink of an eye, leaving us wondering where all the time went. As a business, it’s always good to reflect on how you’ve done each year to learn from your mistakes, find new opportunities, and continue to grow your business and make customers happy. We’ve decided this year to go even farther and reflect on what has happened in the world as we close out the decade. This is A Decade in Review. 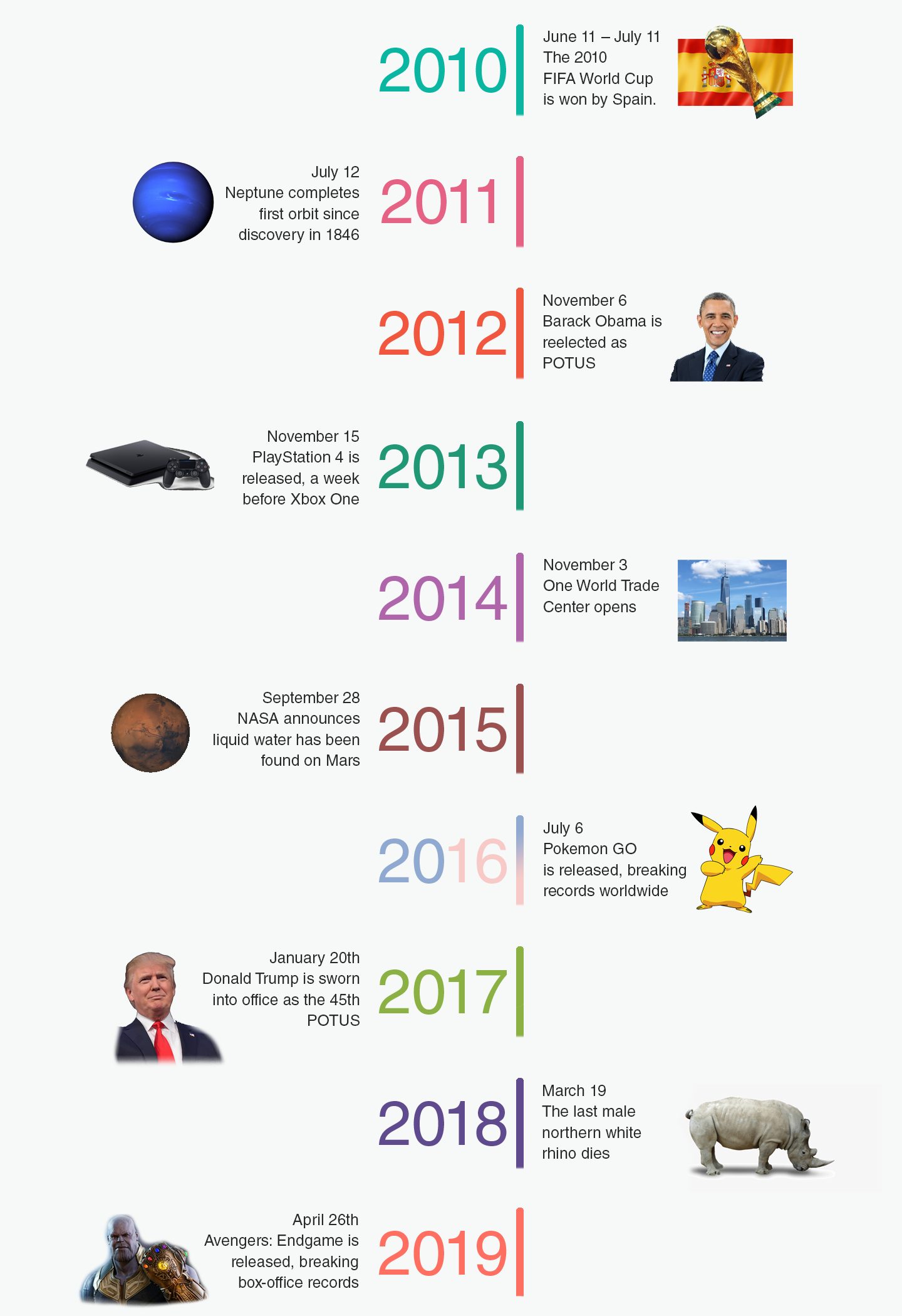 2010: The start of a new era, and a year that kicked off with the completion of the Burj Khalifa in Dubai, the tallest man-made structure in the world. This year also included the 2010 Winter Olympics, held in Vancouver, and the launch of Instagram. Though, like every year, it is not always sunshine and rainbows, and there are times of trouble, like the explosion of Deepwater Horizon, or the tragic earthquakes in Haiti, Chile, and New Zealand. As we look back, we try to focus on the positives, and the events that brought us together in pride and joy, like the FIFA World Cup, which was hosted by South Africa and won by Spain. We can still hear the vuvuzelas.

2011: Space. The final frontier. NASA announces that the Mars Reconnaissance Orbiter has captured photographic evidence of possible liquid water on Mars. The ground trembles and quakes.  A 9.0 magnitude earthquake hits off the coast of Japan, triggering a massive tsunami and the meltdown of Fukushima Power Plant. The world mourns. We do as humans do, and we stand together strong, and we look ahead to the future, where Curiosity lands on Mars and continues to operate to this day, as Neptune makes its first orbit of the Sun since being discovered in 1846.

2012: Queen Elizabeth II celebrates her 60th anniversary of her accession to the throne, where she continues to reign happily as we enter 2020. Lonesome George, the last known Pinta Island tortoise, dies in Galapagos National Park at over 100 years old, marking the extinction of the species. A skydiver named Felix Baumgartner becomes the first person to break the sound barrier without any machine assistance during a space dive from 128,000 feet. Grumpy Cat, the internet sensation, is born, and will soon enter the lives of meme lovers worldwide. Barack Obama is reelected as the President of the United States.

2013: The most powerful meteor to strike Earth’s atmosphere in over a century explodes over Russia, prompting international concern regarding protecting the planet from subsequent strikes. Pope Benedict resigns, becoming the first pope to do so since 1415, and pope Francis is elected, becoming the first pope from the Americas. The El Reno tornado strikes, lashing out with winds of almost 500 kilometers an hour, and the widest tornado ever recorded on earth. Sony releases the PlayStation 4, becoming one of the most popular game consoles of all time, just a week before the Xbox One. Gamers rejoice.

2014: Mario Goetze receives a cross from the left, he catches it in his chest, perfectly controlling the ball. It drops in front of him, and he volleys it past the goalkeeper, sealing the win for Germany in the 2014 FIFA World Cup Final against Argentina. Over one billion people worldwide watch this happen. After 8 years of construction, One World Trade Center is officially completed, standing as the tallest building in the Western Hemisphere.

2015: On a hot summer day in May, Les Femmes d’Alger, a painting by Pablo Picasso sells for nearly 180 million dollars, setting a new world record for a painting. Weeks later, Ireland votes to legalize same-sex marriage, becoming the first country to legalize by popular vote. New Horizons, a NASA spacecraft, performs a flyby of Pluto, becoming the first spacecraft in history to visit the formerly 9th planet in the solar system. Following their previous estimates and photographic evidence, NASA now officially confirms that liquid water has been found on Mars, bringing us one step closer to discovering alien life – time to call Mulder and Scully.

2016: For the first time in history, Portugal wins the UEFA Euro Championship, beating France in the final. A young boy falls into an animal enclosure at the Cincinnati Zoo in Ohio, where a large gorilla named Harambe lives. Fearing for the boy’s life, a zoo worker shoots and kills Harambe, causing worldwide controversy and sadness. After almost 100 years, The Chicago Cubs strike it out of the park and win the World Series, ending the longest championship drought in baseball history. Do you want to be the very best, like no one ever was? Do you want to catch them all? Then you’re probably of the more than one billion people to download Pokemon GO at its release and join the Pokemon mobile craze.

2017: January 20th 2017, Donald Trump is sworn in as the 45th President of the United States of America. Two months later, the March North American blizzard strikes the Northeastern US and Canada, dropping over three feet of snow and ice in many areas. Mickey Mouse strikes again, as The Walt Disney Company announces that it will be acquiring 21st Century Fox, including all their studios and properties, for 66 billion dollars.

2018: Almost two billion people worldwide watch the wedding ceremony of Princess Harry and Megan Markle, where many would say David Beckham was best dressed. Months later, the FIFA World Cup is held in Russia, and France takes the crown for the second time in history. Move aside Dolly the sheep, Zhong Zhong and Hua Hua are here, the first primates to be cloned using the somatic cell nuclear transfer method. As Apple Inc. becomes the world’s first public company to achieve a market value of 1 trillion dollars, the world’s last male northern white rhino dies in Kenya, leaving the species functionally extinct.

2019: The present. A year of ups and downs, a year of monumental events, events that will change the course of history. 2019 is the year the Avengers finally defeated Thanos, and broke box-office records around the world with the release of Avengers: Endgame. It is the year that gave us The Irishman, a critically renowned film by Martin Scorsese, starring Robert De Niro and Joe Pesci. The year that the Toronto Raptors won their first ever NBA Championship.

Looking forward, 2020 and beyond: We are entering a new age. A new age of information and technology. 2020 is already set to give us some massive events – Euro 2020, the Summer Olympics in Tokyo, the US Presidential Election, and more. How can we make this the best year, and make this the best decade of our lives? By doing what we can to be good. Be good to each other, be kind to the world, set up green initiatives at your workplace, set goals for yourself and don’t beat yourself up if you can’t meet them. Just try, try your best. Try to lend a helpful hand, or a shoulder to lean on. Be there for someone, and be a voice of reason, and have an open mind. Let’s go into the new decade with hope in our hearts, not despair. Look towards a brighter future and do your part to make it happen.